A very ‘lab_’ Christmas, just like the ones we used to know… 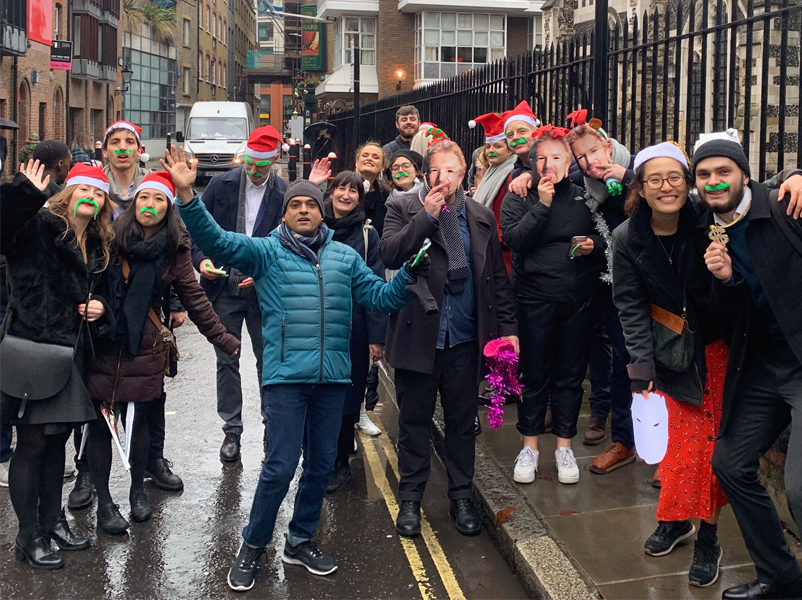 Any friends of ours here at Energylab who have known us for a while, will know that, as part of the lab_ collective, we don’t do Christmas parties by half. They’re far from ‘normal’ – as is probably our way with most things, now we think about it!

Of course, this Christmas was no different. As we all locked up the office on the chilly morning of the 12th of December, no one knew quite what to expect – well, apart from the one thing we were sure of – we were in for a characteristically bonkers day.

And our elves did not disappoint.

By giving us a deliberately evasive ‘clue’ in the form of an old fashioned greetings card the night prior; with the lyrics “I’m dreaming of a white Christmas… just like the ones we used to know…” emblazoned across it, they prompted us to imagine classic moments of Christmasses gone by. Scenes of chilly walks across London to visit friends and neighbours, joy, laughter and merriment in local pubs and, of course, the magic of sleigh bells ringing in the air drifted through our minds as we slept the night before.

And we were sort of correct.

To kick off the festivities everyone was split into four suitably festive teams – the Silent Knights, the-Noel-it-alls, the Gangster Wrappers and the Grinch Gang – and given a (not so) secret meeting point, before embarking on a Clerkenwell-wide festive scavenger hunt. 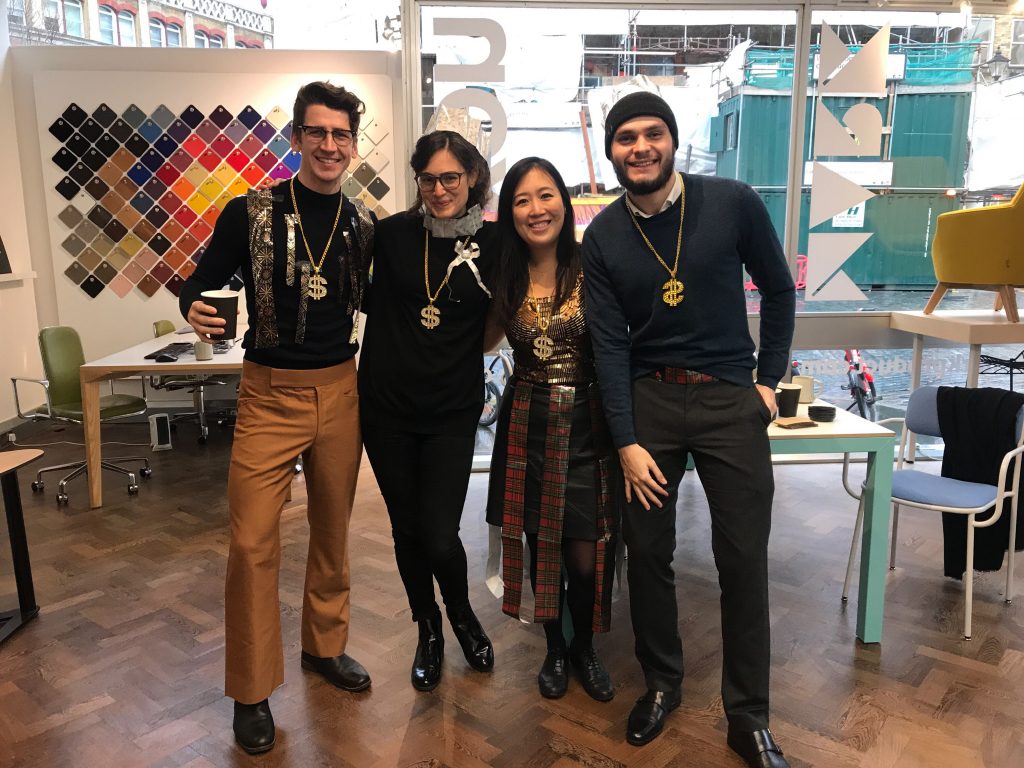 Points were awarded as haphazardly as was to be expected from the secret elves HQ, but that didn’t deter the teams from braving the cold weather and rain, competitive streaks running at an all-time high, to respond to an array of questions and tasks (from finding Santa Claus to sending a video of them singing ‘We Three Kings” in front of bemused passers-by,) all in the hope of being the ‘winning’ team. 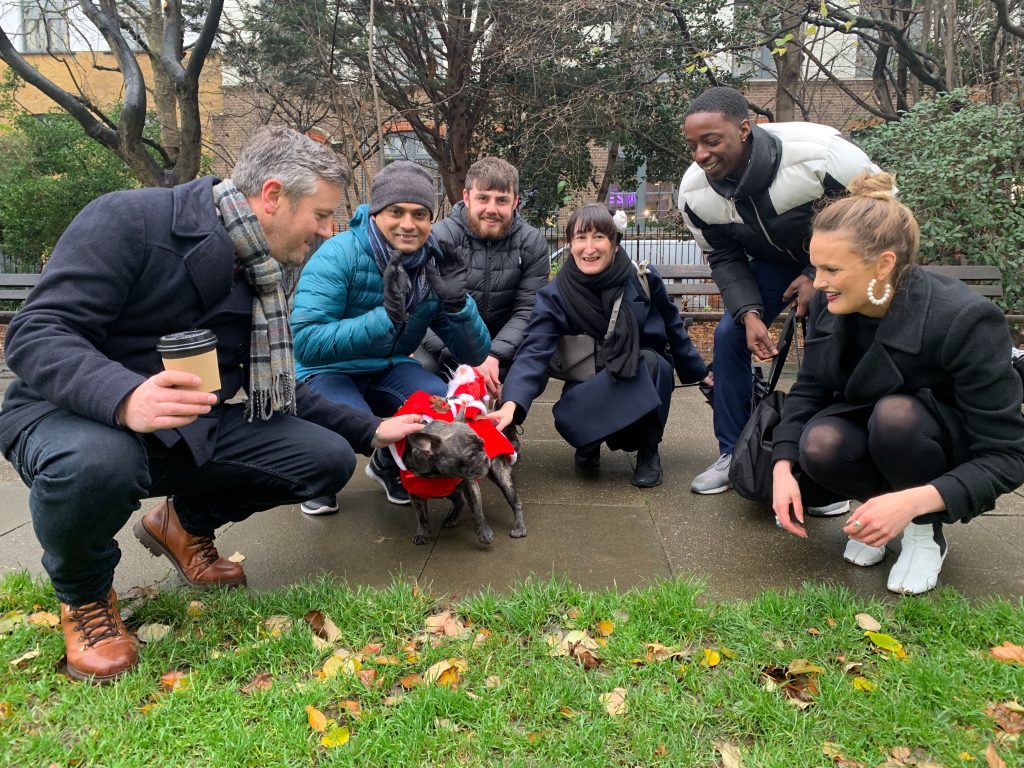 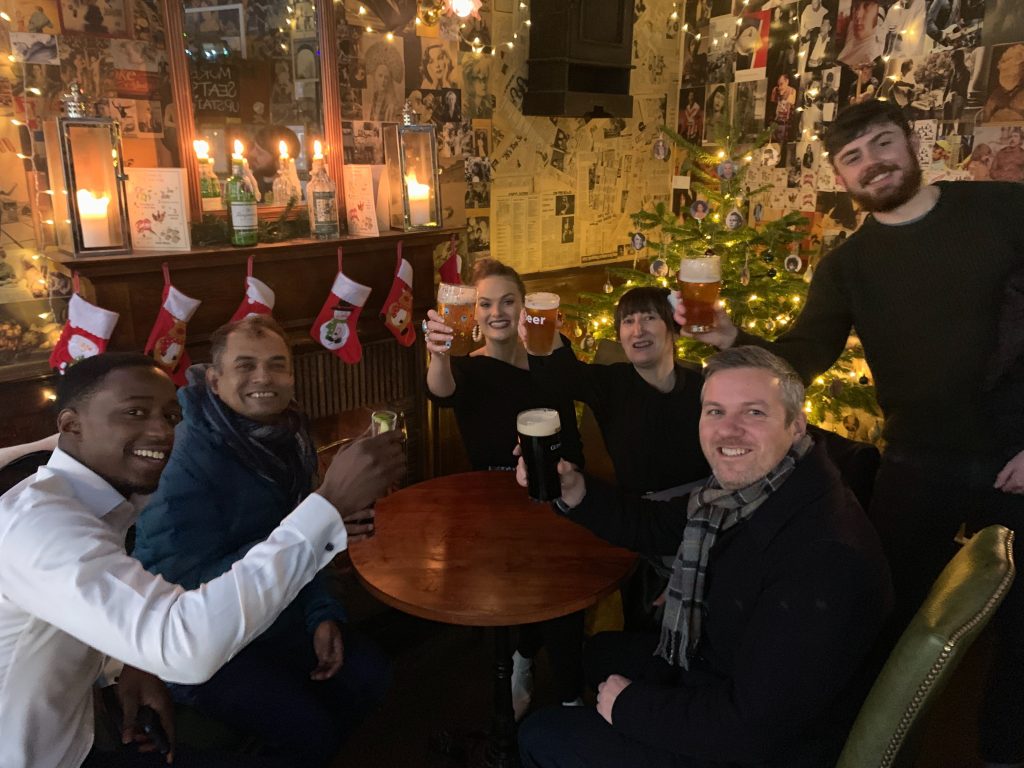 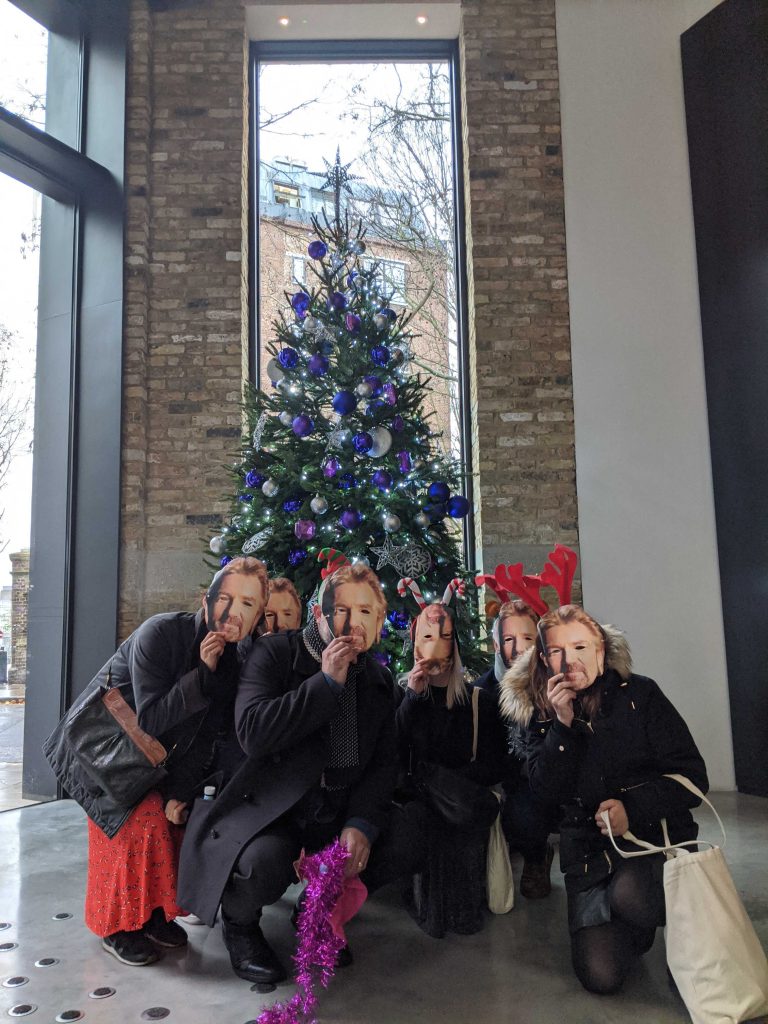 The final venue was then revealed in the final clue. And bearing in mind the theme of classic Christmases, we all know that Christmas is a time for coming home. And what says home more than our good old local, The Wenlock Arms, which, let’s face it, is basically our second home. And while everyone else had been wandering the streets of London (perhaps for longer than expected…), our little elves had been busy transforming our beloved ‘Wenny’ into a fine dining experience, with food prepared and hand-delivered by our good friend, the trusty Alan (Corporate Chef), who never fails to deliver year-on-year. A ‘Christmas card’ Christmas was what we asked for, and how it was being delivered!

But of course, this is a lab_ collective Christmas party, so this was by no means the end of the story. Food was consumed to the point of popping, crackers were cracked, merriment flowed, and the scene to anyone walking past the best local in the world, could not be more Christmassy.

But it was about to be…

As the post-Christmas Dinner quiet reached every corner of the pub, the piano in the corner started to tingle away to “Winter Wonderland”, played by a seemingly talented local. However, as the next song began, and the beautiful voices of The London Gospel Choir suddenly drifted across the bar, it became clear that this was in fact a surprise performance. The magic of music filled the air and it wasn’t long before everyone was bellowing out ‘the 12 days of Christmas’, locals included. By the end it even appeared that we’d lost a few members of our team to a music career; becoming fully-fledged ‘new members’ of the band (regardless of whether the band wanted them or not). 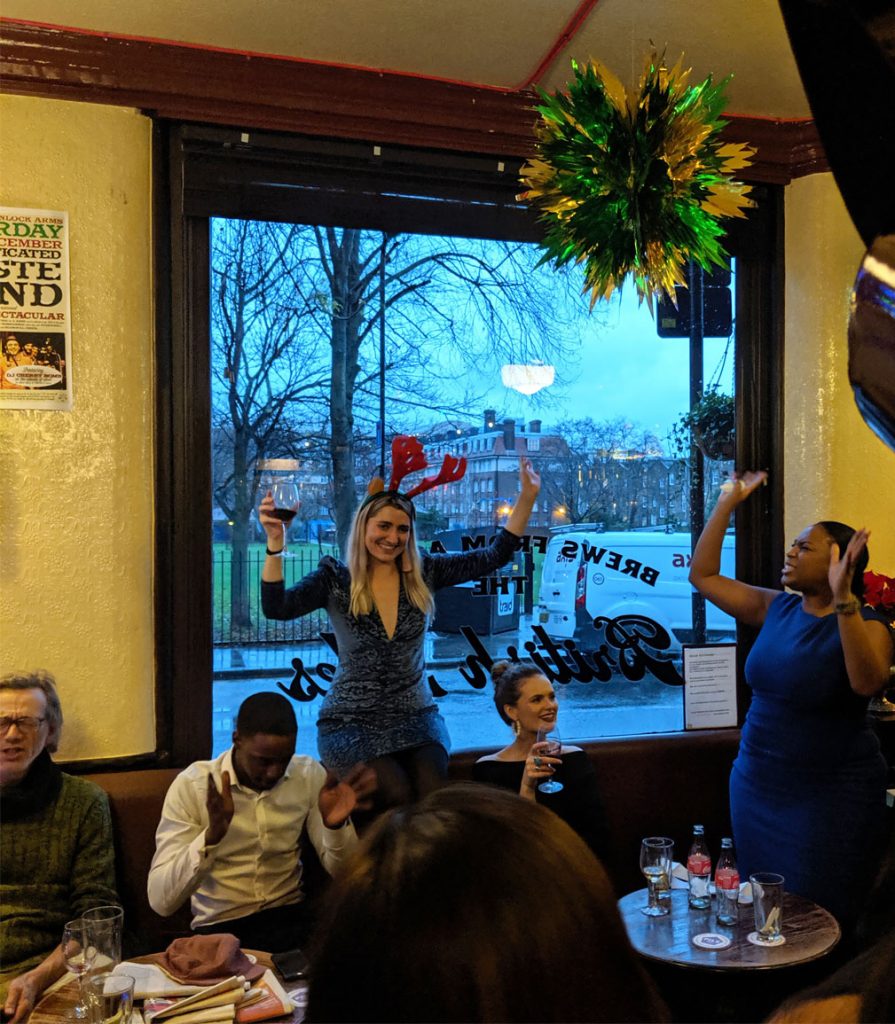 You would think this was the emotional peak of the day, but as we were encouraged to gather around the TV for the Queen’s speech (naturally), it became clear that there were more surprises ahead. Rather than HRH Queen Elizabeth delivering a summary of the year, to everyone’s astonishment, members of our friends and family (some from many corners of the globe) filled the screen one-by-one. As they, in their own personal way, delivered festive greetings and quotes from our ‘Most Valuable Player’ nominations received throughout the year. As we heard our loved ones using our colleagues words to let us know we were each appreciated in our own magical (and often hilarious!) way, it was impossible to deny the emotion of the moment. 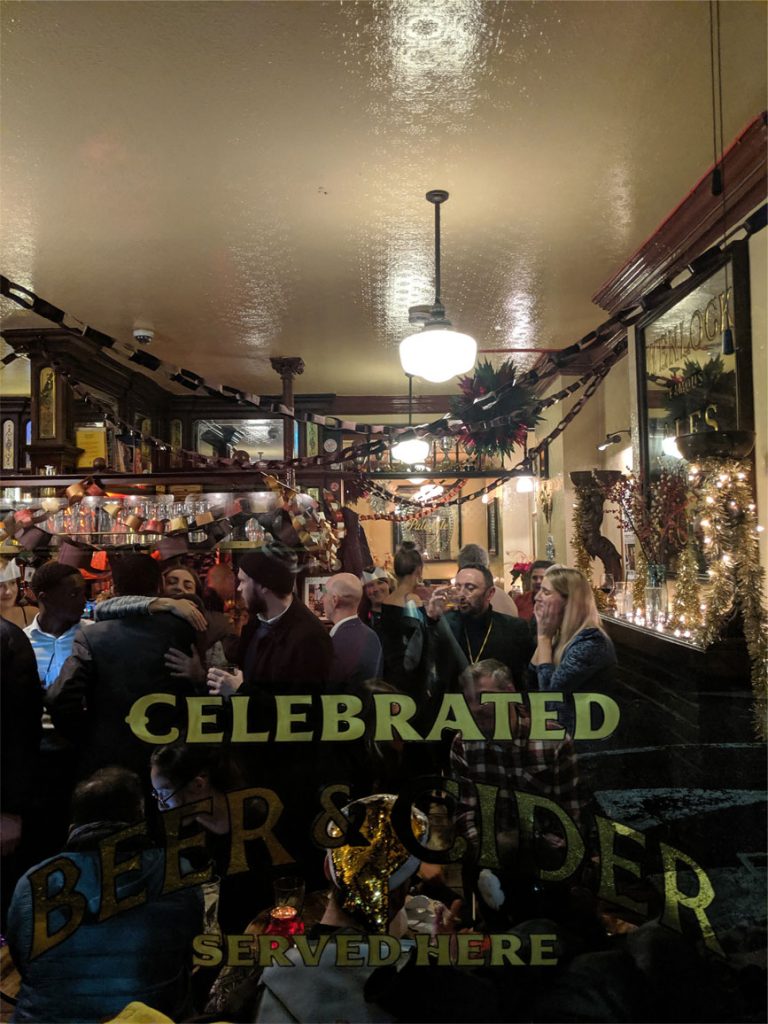 Once the napkins had wiped away the last tear, a vintage bus pulled up outside of the window ready to take us back in time and onto the final secret location. All aboard, we weren’t likely to sit quietly; so as the bus wound its way through the busy streets of London, we all sang our hearts out beautifully (if we say so ourselves), to a songbook of carols, accompanied by an array of tambourines, maracas and bells. It’s safe to say the poor bus driver was a very patient man. 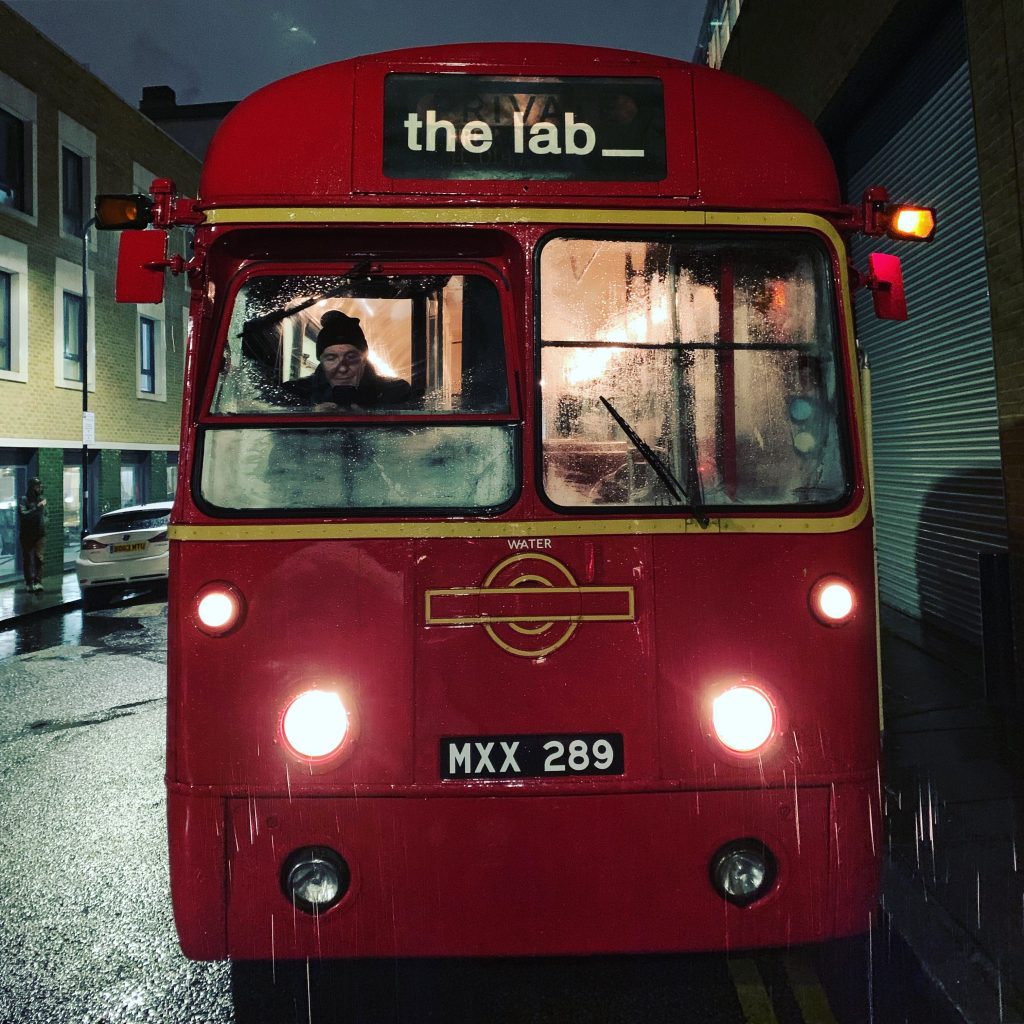 Arriving at the end of a fairy light bedecked walkway, the view of the Greenwich yacht club, stilted in the middle of the Thames, added to the old school magic of the adventure. And wandering through the twinkling fairy lights it was hard to believe there were more surprises ahead.

But of course, there were. Waiting for us was our cha cha instructor – (of course!) – Magda. Fortunately for both us and Magda herself, she had a lot of experience with parties, so our ‘merriment’ didn’t obstruct our chance to learn the dance properly. And what we may have lacked in grace and natural talent, we more than made up for in enthusiasm, with bodies being flung around the old fashioned chequered dance floor.

Hearts beating with exertion and joy, we danced and drank and hugged and laughed and became the people we all like to be at Christmas.

And yet it was still not the end.

A bellowing sound came from downstairs, ears pricked up and amazed faces were to be seen all around as an entire brass band joined us on the dancefloor, ensuring the dancing hit a whole new level.

And this was how we remained, full of the joys of the season, dancing with our friends.

Until the music stopped. So we sang ourselves. And we haven’t really stopped since.

From everyone here at Energylab, we’d like to wish each and every one of you a very Merry Christmas and a Happy New Year! 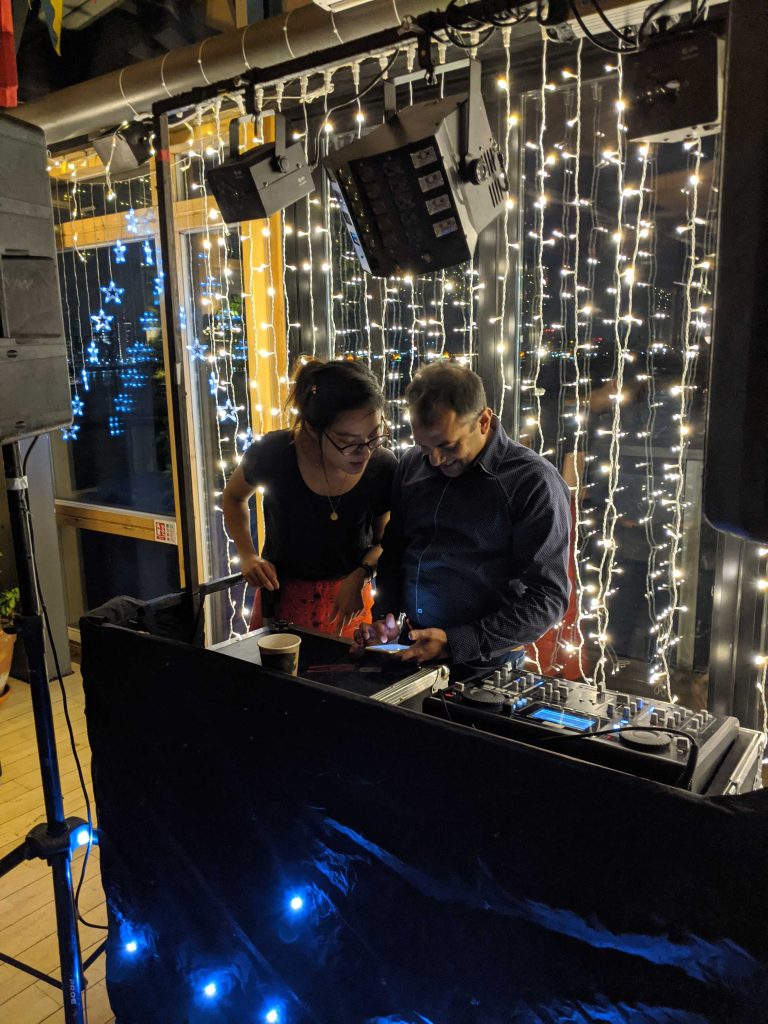 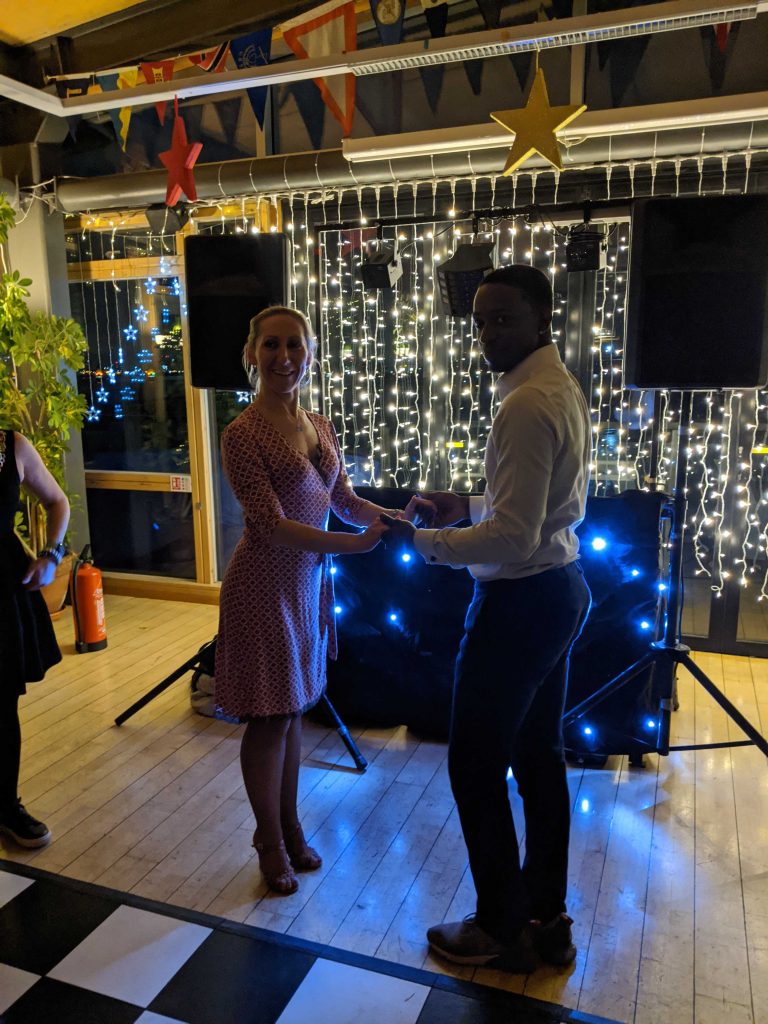 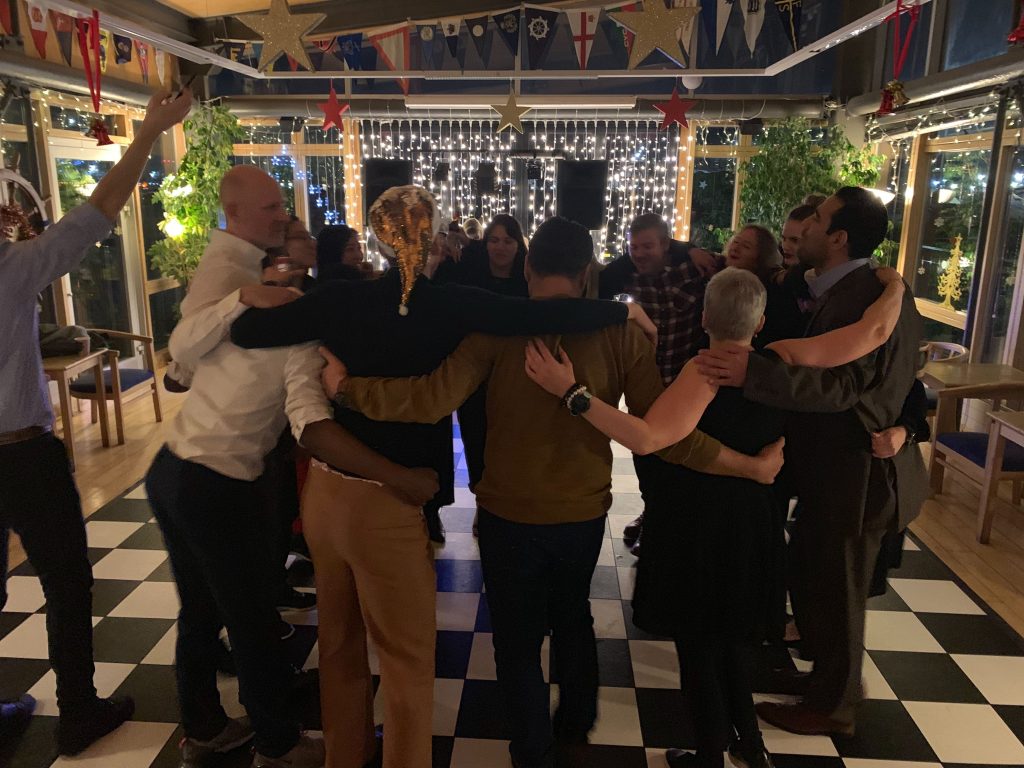